These past few days, we have been living in a wonderfully unusual hostel. How is it different from others,  you might ask? Well, it resembles an old campsite, arranged in a former warehouse. Vans were converted into hotel rooms, each with its own unique design. You can spend the night in an old sleeper train, in a capsule that looks like a spaceship, in an old-timey British living room, or in a fishing hut. The campsite is equipped with a several pieces of old and odd furniture, and a variety of sculptures.

Spokesman Thomas Lenz talks about the hostel as if it was his own child – with love and pride. He says that the uniqueness of the hostel attracts people. Not much money needs to be invested in advertising, as guests talk about it themselves.

Being in a constant state of transformation, the hostel acquires caravans from all over the world, at auctions of used vans, at fairs and on flea markets. On the campsite, you can find caravans from Poland, Romania, the Netherlands and the United States.

I spent my nights in a caraven called „Nautilus“. Its design is based upon the science fiction novels written by Jules Verne who created the legendary submarine „Captain Nemo“. Inside the van, the walls are covered with green patina. Another hostel room – a tent on top of a blue subcompact Trabant – causes nostalgia for travelers from former Eastern Germany. „Big Ben“ – an old van – is decorated with the British flag and looks like a mini England from the inside: Victorian furniture, colorful curtains, a Chinese tea set . 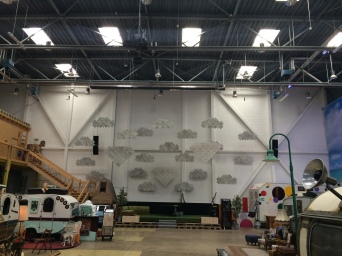 To keep things interesting, the hostel also provides space for cultural activities. A big stage can be set up for musicians to perform, a big screen may serve as as a drive-in movie theater. In general, the hostel is open to new input from anyone. „If you have any ideas and suggestions for the design of the hostel, we are happy to look at them“, says Lenz,“And feel free to bring your pets“.