The quaint town of Brühl, between Bonn and Cologne, is anything but a social hotspot. This does not mean there is no need for social work, but the local youth club is different from what you might expect.

Not many middle sized German towns are as seductive to foreign eyes upon first sight as Brühl. Right upon leaving the main train station, your look falls the palace of Augustusburg, classified as UNESCO World Heritage and its adjoining park. From here, it’s a 15 minute walk through a quiet residential area, to CULTRA, the local youth centre. 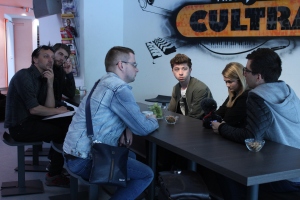 “Youth clubs are often associated with keeping young people away from drugs, but we don’t really have those problems here,” says Marcel Weyrich, press officer of Bruehl’s youth house. Yes, this youth club has it’s own spokesperson and it doesn’t stop there: CULTRA offers a large multifunctional hall for concerts, parties or plays as well as a radio studio and film equipment.

“We use this material as a means to an end,” explains Marcel: “We want to give young people the possibility to realise their ideas, to empower them.” According to the 28-year-old, even in the comparatively well-off community of Brühl, support for the young is important. CULTRA therefore aims to be a contact point for youngsters, who want to realise cultural projects.

“Recently we ran the second edition of flea market,” says Michelle Lubert, who came up with the idea. “It is not a conventional flea market, but it’s a platform where young people can sell second hand stuff that other people their age might be interested in. For example, we had a lot of girls selling their clothes.”

Michelle is a part-time employee for CULTRA, but the centre is open to anyone who comes up with a project, or wants to become involved in the organisation of the centre. Jahn Leidner, for example, dedicates an entire year of his life to the centre: He participates in a national volunteering scheme, which has grown out of Germany’s obligatory military service, which was abolished in 2011. Since then many young man start university straight after high school. Jahn, however, enjoys the practical experience offered at CULTRA. “It gives me the opportunity to swim against the stream,” he says and grins.