He started by explaining that, in 2015, one million refugees and migrants arrived in Germany, seeking both short-term protection and long-term integration. More than 50 percent were not older than 25. In 2015, around 274.900 new applications for asylum were filled.

The Syrian applications are usually processed in four months with a 98 percent acceptance rate, but the applicants have to wait around 9 months before being able to start the asylum application process.

Apart from the Syrians,  the most accepted nations are the Iraqis,  Iranians, and the Eritreans. Substantially less welcomed are the Afghanistan, which are accepted by around 50 percent, as well as Albania and Kosovo.

Benjamin explained that his organization provides  free lifeworld integration services in education, work and social participation to the refugees and migrants. 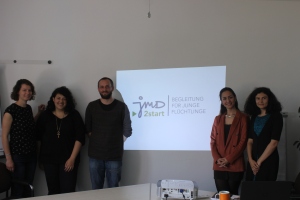 They have provided counseling services for young people, since their creation. At first, it was eastern European ethnic Germans coming after the fall of the Wall, then people of Turkish background and now the refugees and migrants of the new wave.

The JMD collaborates with many state institutions and other nonprofits. It provides language training as well as dance, theater and job application trainings.

All the JMDs across Germany in 2014 service 86,000 young people with assistance,  provided 45,000 personal integration plans and 800 social workers.

The project that Ben is specifically involved in, jmd2start, operates in 24 locations and focuses on providing personal counseling and group activities, especially access to the labor market and secondary school involvement.

The meeting ended with discussions about the role and repsonsibility of journalists in presenting the refugees and the integration efforts made on their behalf.